As part of the 24 May celebrations, we would like to showcase the use of the Bulgarian Cyrillic alphabet on websites and the Bulgarian internet as a whole.

Why is it important to know more about the Cyrillic alphabet and Bulgarian Cyrillic more specifically?

It is believed that Clement of Ohrid (Kliment Ohridski) came up with the Cyrillic alphabet. It is named after a teacher of his, Constantine-Cyril the Philosopher. Over the years, Cyrillic has undergone significant change and gained in use among the various Slavonic peoples.

The biggest change to the alphabet was made by Russian emperor Peter the Great in 1708. The aim was to simplify book printing by giving the alphabet a strongly Latinised flavour, which permanently changed its character. This is where the Bulgarian and Russian Cyrillic alphabets would go their separate ways. Typographically speaking, Russian Cyrillic is on an equal footing with late Baroque Latin typography.

In Bulgaria, the old version of Cyrillic was used until reforms were made at the start of last century and bigger changes took place after 1945 under Soviet influence. Today, with the development of technology and for various other reasons including a lack of awareness of the subject, Russian Cyrillic tends to be widely used in Bulgarian print and online texts.

In reality, there is little difference whichever alphabet is used, but the same text can look different as they both involve two separate approaches. We look further into this below. 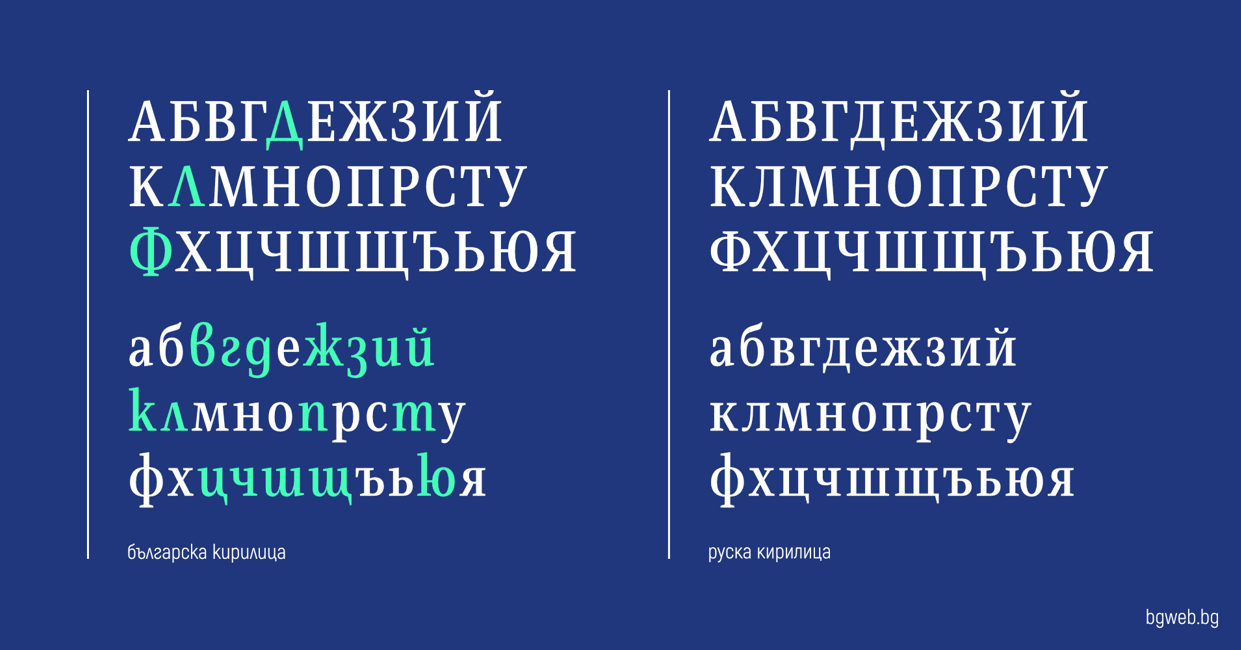 We hope to shed more light on the subject here and we appeal to all who write in Bulgarian – web designers, programmers, marketers, writers and the media – to use Bulgarian Cyrillic.

The jury for ‘Site of the Year 2021’ added the use of Bulgarian Cyrillic on Bulgarian projects as an important bonus point in its award criteria.

The main differences are most obvious in lowercase letters. Russian Cyrillic makes no distinction anymore between handwritten and printed letters. It’s based on uppercase Latin letters, both in uppercase and lowercase. 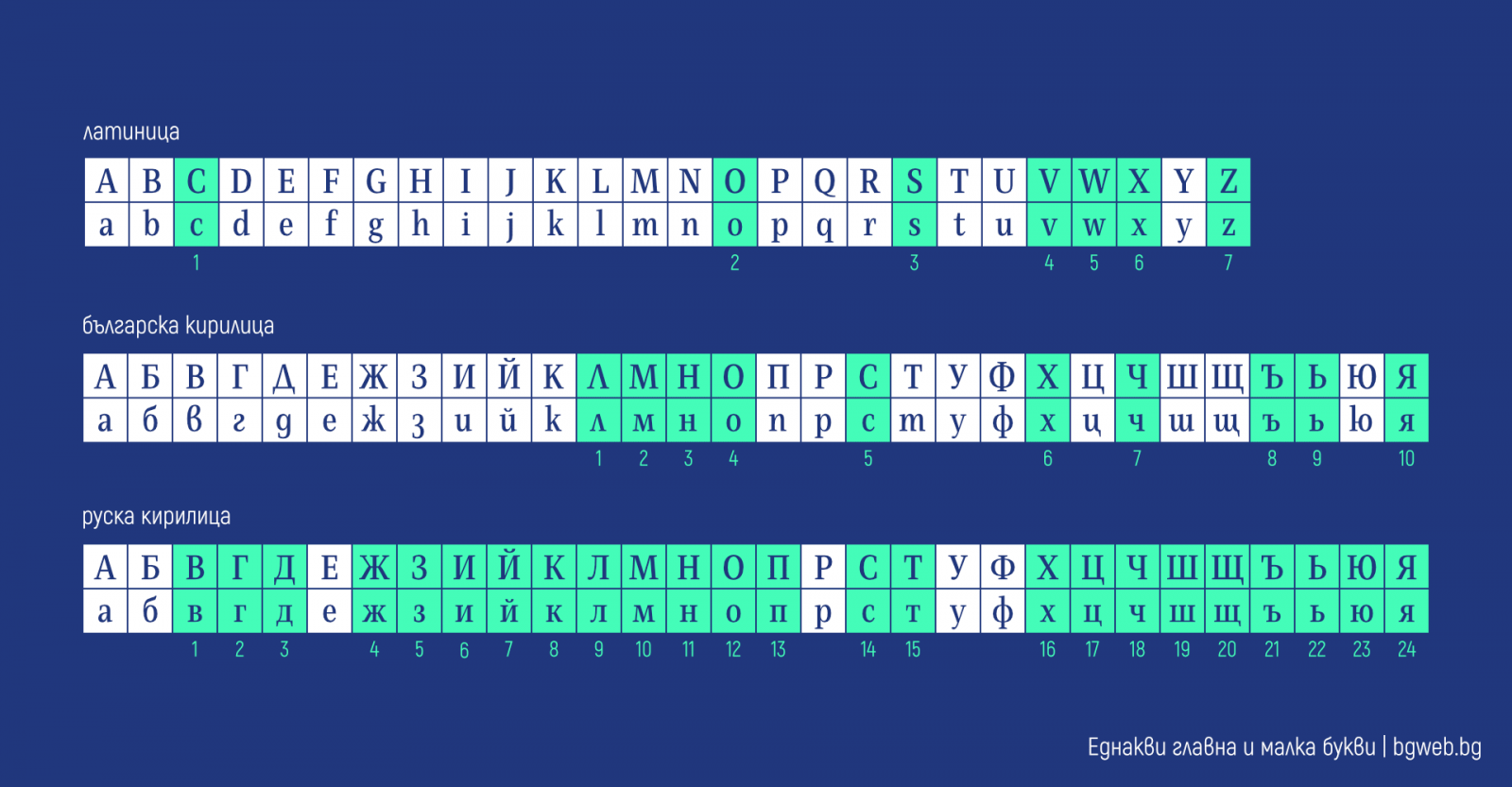 Bulgarian Cyrillic is more naturally aesthetic and the shapes of the letters are based on handwritten lowercase characters. The shape of the lowercase letters is rounder, more distinct and more easily recognisable compared to the shape of the uppercase letters. Many of them have upper and lower strokes (б, в, д, ж, з, к, р, у, ф, ю), making them more recognisable and making reading easier. 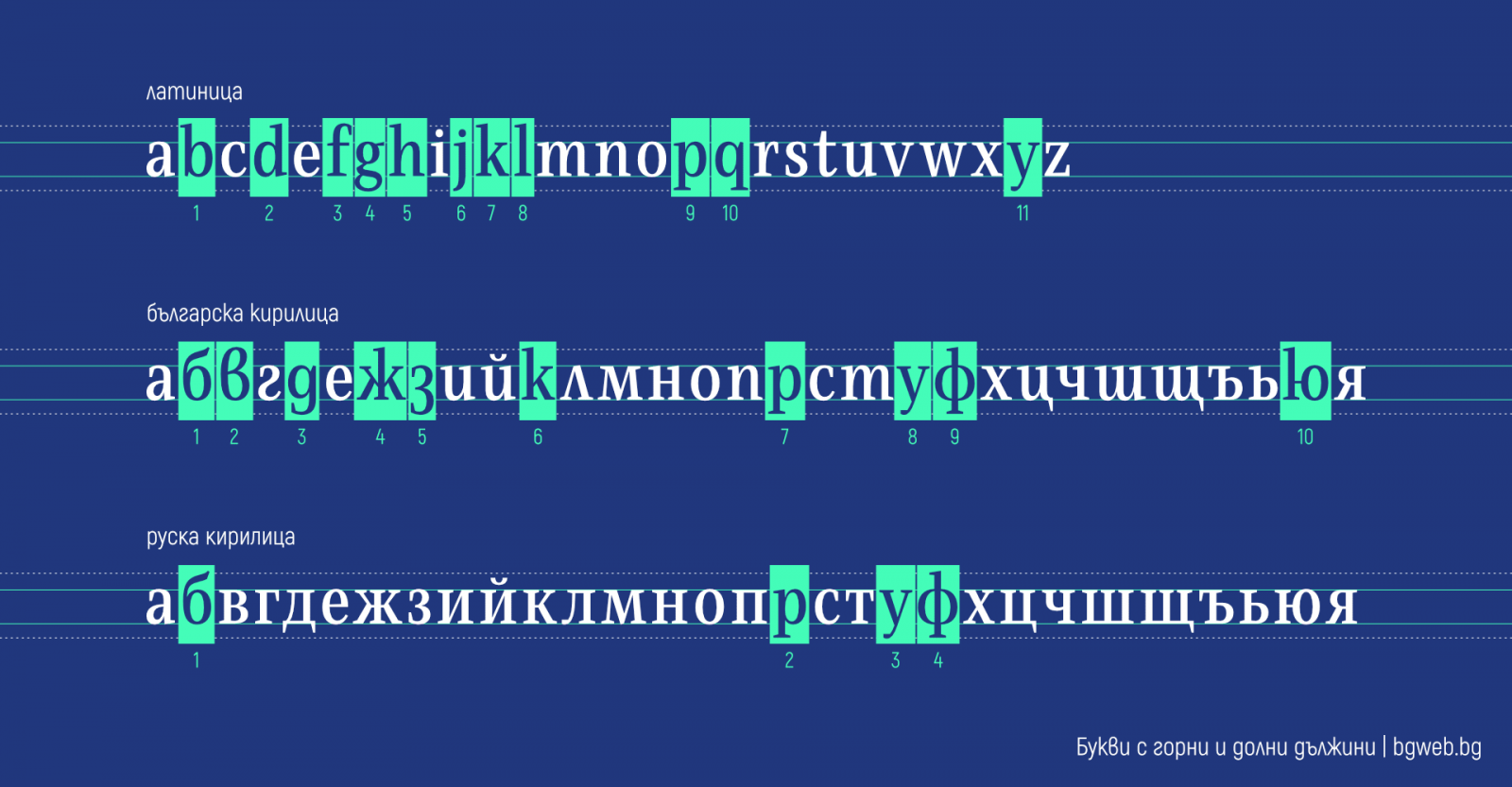 You can read a detailed article on the history of and differences in the two forms in ‘Kultura’ newspaper: ‘Bulgarian Cyrillic as a sign of identity’ (in BG).

How can I use Bulgarian Cyrillic in software?

The Bulgarian equivalent may be most often used in one of the following ways, depending on the font itself and how your software uses it:

From the main menu: Format > Font… or (CTRL + D for Windows, CMD + D for Mac). In the Advanced tab, under Advanced Typography, select Stylistic sets and the correct number of the Bulgarian version.

From the main menu: Tools > Language > For selection > Bulgarian

From the main menu: Window > Character. Change the language to Bulgarian. If this doesn’t work, select Window > Type > Open Type. Choose the Style Sets menu and from there the correct Bulgarian version number.

From the main menu: Text > Show Typography. Select Stylistic Sets and tick the box next to the correct Bulgarian version number.

In the right-hand panel on the Design tab, select Text, open the Type details pop-up menu (the one with the three dots), select Stylistic set and tick the correct Bulgarian version number.

Apple’s operating systems do not yet offer the localised interface version in Bulgarian. But they can be set to use Bulgarian Cyrillic by default almost everywhere, for example when you make notes or send messages.

Open Settings > General > Language & Region. Select “Български”. Confirm this by clicking on “Change to Bulgarian”. If you don’t confirm it, click the icon on the right and by scrolling up the list and add “Български” to the top of the list. Restart the system to enable use of Bulgarian Cyrillic.

Open System Preferences > Language & Region. In the Preferred languages panel, click the ‘+’ button. Select “Български” and click “Add”. Confirm by clicking on “Use Bulgarian”. If you don’t confirm it, add “Български” to the top of the list. Restart the system to enable use of Bulgarian Cyrillic.

All modern browsers have OpenType fonts pre-installed along with their characteristics. To select the Bulgarian version of the font you want to use, you need to know its Stylistic Set number. For this example, we’ll assume your font has Bulgarian Cyrillic in Stylistic Set under number 1 (ss01) and that it may be activated with the following CSS declaration: 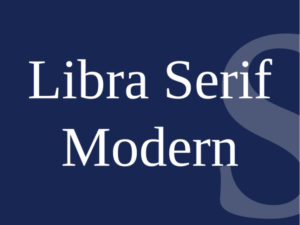 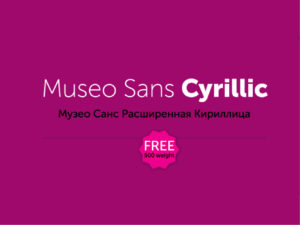 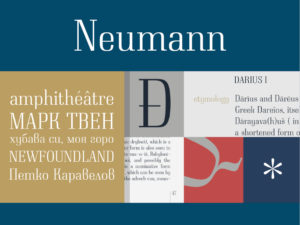 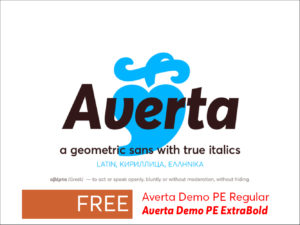 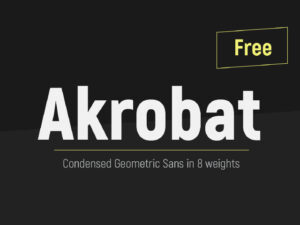 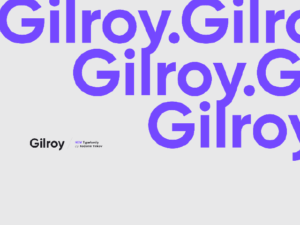 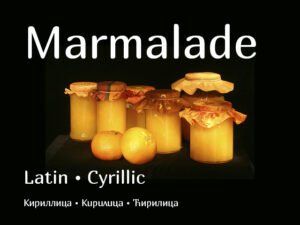 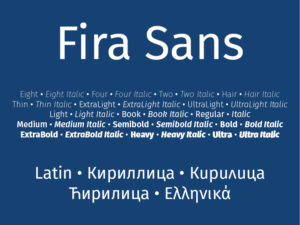 Foundation for the active development of the web

Take part in the Site of the year competition